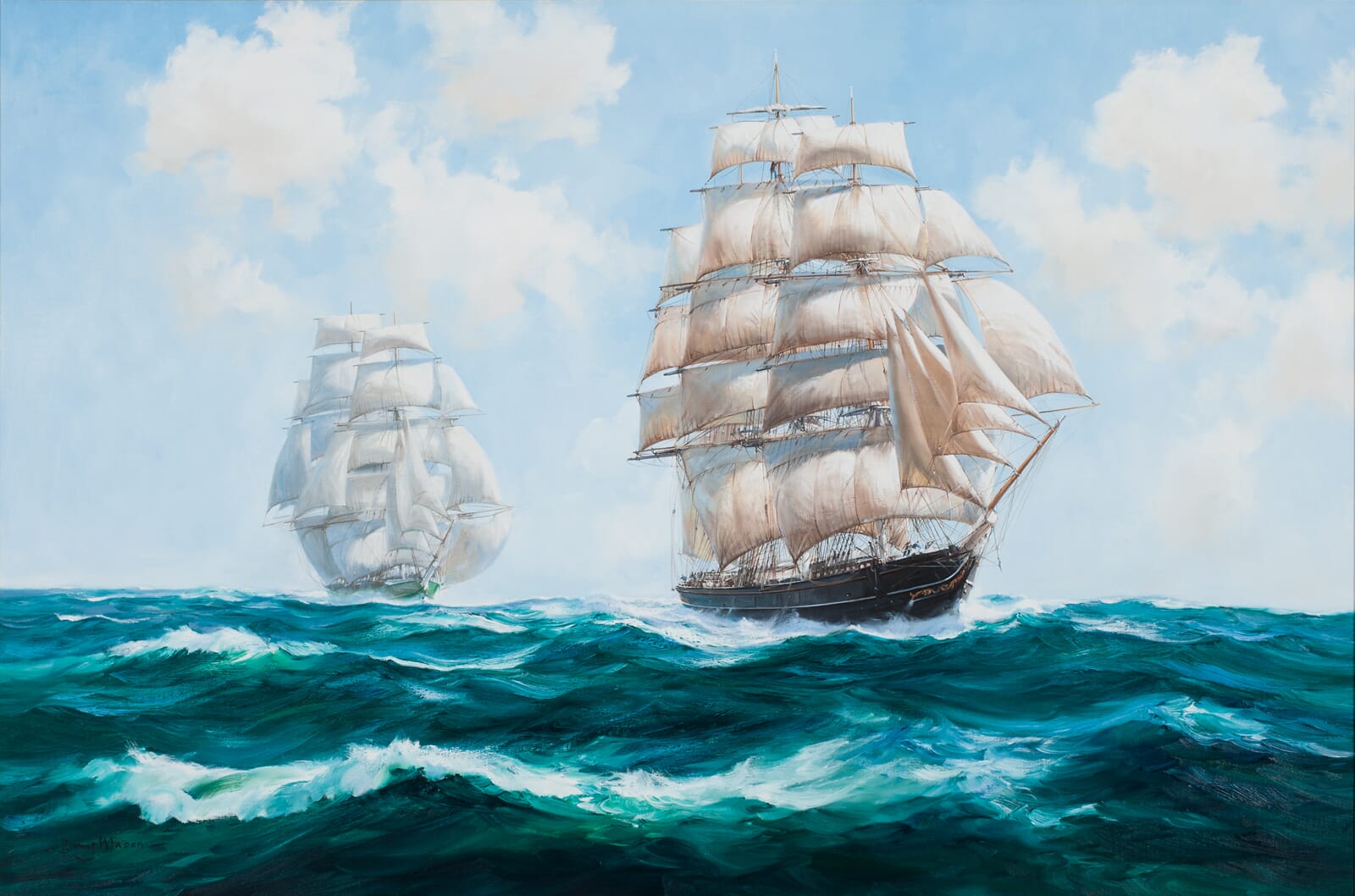 Whenever we talk about racing clippers, the two most famous names that come to mind are Cutty Sark and Thermopylae. They were designed to appear almost the same; hence, no one could decide which of them was the finest in terms of build quality. History reveals that both these clippers were designed as rivals to each other; just a little material variation is the main comparative point between them.

There is no doubt to say that both of them were ultimate ships, and they received great fame worldwide. However, the only sad fact is that they were developed by the end of the clipper era when the design of the Suez Canal was proposed. This new model of ship almost ruined the clipper business in China.

The Origin: Thermopylae Vs Cutty Sark

Thermopylae was initially designed during 1868 and then to beat its design, manufacturers brought Cutty Sark into the market within one year. The first one was designed by Walter Hood of Aberdeen by following the designs proposed by famous architect Bernard Waymouth. Both these famous builders had a long association with each-other, and it was one of their ultimate masterpieces. Furthermore, Cutty Sark was designed by Scott & Linton, a lesser-known Dumbarton firm following designs of Mr Hercules Linton. This ship was owned by Caption John Wills who was famous as Old White Hat at that time. This master mariner was known for his amazing knowledge about ships and their running mechanism. However, the thrifty methods used by him lead to unsatisfactory results many times.

As already said, the second one was designed after analysing the features of first one; hence, their external appeal was almost similar. Both of them were better known as composite full-rigged designs. Thermopylae and Cutty Sark, both had planking of iron frames on the wood, and the overall displacement at load draught was around 1970 tons for them. The major difference was in terms of dimensions of these ships; although the width for Thermopylae and Cutty Sark was the same as 212 feet between the perpendiculars with 36×21 feet beam depth. But the length of first was around 948 net with 991 gross; whereas the second one had 921 net and 963 gross.

Talking about the finish, Thermopylae was lightly built; however, its rival had more intense fittings. The material used was also teak instead of yellow pine. That is why Thermopylae used to sail faster during lighter wind, but Cutty Sark was believed to be the fastest during windy forces.

Thermopylae was ready to take its first sea ride by the end of year 1868. It was handed over to Captain R. Kemball during Melbourne voyage. Although he was not recognized as a regular master on that famous Aberdeen Line; he was selected for this ship due to his experience with Yangtse. History reveals that Thermopylae crossed Lizard in just 33 hours while travelling from Gravesend. In order to cross Equator, the master took only 21 days. This ship took a record time of only 62 days to travel between Lizard to Melbourne. After releasing the outer cargo, the ship took its journey to Newcastle for loading some coal towards Shanghai and created a new record of covering the entire journey in just 28 days. In the month of July, the ship loaded the tea, and it started journey to home from Pagoda Anchorage; it took record making 91 days to complete this distance even during the monsoon season. However, this third record was soon broken by Sir Lancelot whose captain was Robinson, and it took only 89 days to complete the same journey. It is still a record for any ship in the world to cover this long-distance during monsoon.

Thermopylae was basically known for its ultimate speed; however, Captain Wills was determined enough to beat the records with Cutty Sark. The new rival captured attention in 1870s. Thermopylae completed its second journey from Gravesend to Melbourne just within 71 days, and it took 105 days to travel from Foochow to London. On the other side, the builders assigned for the development of Catty Sark were beginners, and the project was taken care by a famous company of that era. However, they had shortage of money before the final launching of this ship; ultimately, the work was suspended at one stage. Later, the design was completed under the supervision of Denny. Even after several ups and downs in its construction work, Cutty Sark finally finished with great pride.

Some reports reveal that Cutty Sark was first not so good to handle tough races on the sea. Its strength was greatly affected by light winds and completed its maiden voyage between London and Shanghai with poor experiences. However, the trip was completed in 104 days, and it was remarkable. The ship sailed from Shanghai almost one month before the voyage of Thermopylae which was carrying 10,000 lb. The Cutty Sark completed its journey in 110 days as compared to the 105 days taken by others; however, the captain during this journey reported several weak spots in the ship that took time for fixing on the way.

In year 1870, Thermopylae raced with Normal Court and completed the passage in 66 days to Melbourne. In the meanwhile, Cutty Sark took the load between London to Shanghai in just 101 days. The next journey of this ship was to Bangkok and then back to China with rice loads. During this era, designers launched Suez Canal, and it captured complete attention of the tea traders within the country. This new invention eliminated the need for Thermopylae and Cutty Sark like clippers and took the market to new trends. Another journey from Shanghai to China was completed by Thermopylae in 106 days in the month of June; however, the same distance was covered by Cutty Sark in September, but it took 108 days.

It is important to mention that both these ships had not direct race during this era. Although their performance was greatly affected by Steamer, the straight race could have a major excitement. Even after the popularity of Steamer, these ships had several journeys on the same path; however, at different times and the fight between both continued. Cutty Sark missed the records several times due to repeated damage during the journeys; but on the other side, Thermopylae had a great experience, and it benefited with the huge knowledge of Captain Kemball.

Later, Indian Ocean gave Cutty Sark another chance to prove its potential, but it had poor experience with lost canvas. Captain Moodie never lost hopes and tried his best to complete the journey. It was able to finish the journey to Shanghai in 122 days, but Thermopylae completed the same in just 115 days. After a few such races, the tea trade in China was almost finished.

In year 1875-1876, they had an outward race where Cutty Sark travelled from London to Sydney almost 9 days ago when Thermopylae sailed towards Melbourne. But due to a collision in the middle of the sea, the captain was not able to complete the sail for Cutty Sark on time; it took 75 days whereas Thermopylae took only 68 days. Carrying tea, Cutty Sark once completed its journey in 108 days while Thermopylae took 125 days; but their records were later broken by Line Steamer which took only 42 days. The position was later reversed in 1877 when Thermopylae took around 102 days, and Cutty Sark completed a similar voyage in 127 days. The Cutty Sark was greatly damaged by collision; stills, its next journey gave a considerable challenge to Thermopylae by finishing the journey in 72 days only; whereas the other one took 74 days. They again took a competitive voyage from Sydney to Shanghai while carrying coal and in this Journey Cutty Sark work by completing the sail in 40 days only; however, the rival took 48 days. Both these ships were then parted for some time.

Later, Captain Willis took Cutty Sark on Australian voyage, and Thermopylae also followed the same track in 1884-1885. Their rivalry sails started again when Cutty Sark successfully beat his rival with a gap of 7 days. In year 1889, Thermopylae was finally sold to W. H. Ross and Company at London who sold it further to a Canadian company. She sailed for shorter voyages for few years and later in 1895; it was sold to Portuguese Navy. It was finally converted into a training ship named as Pedro Nunes. The ship sank off into the river in October 1907.

On the other side, the Cutty Sark took many more journeys under the control of Captain Woodget until 1895 and then it was also transferred to Portuguese. After escaping the major destruction at the West Indies, it was used many times during the beginning time of the war. The ship was later towed to Cape Town in 1916, dismasted and then re-rigged into barquentine. 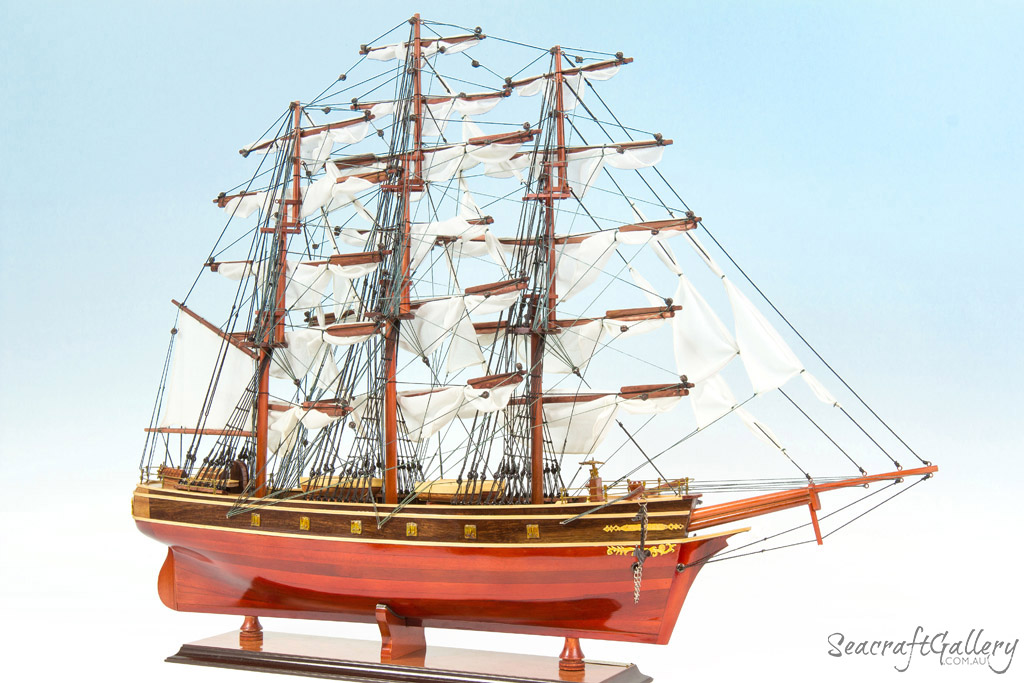 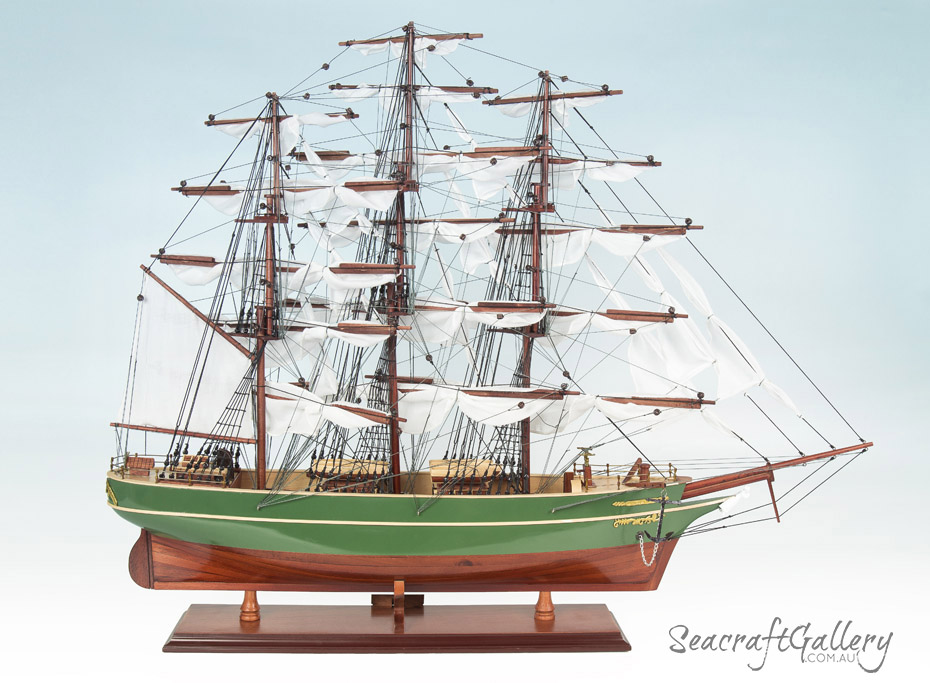 Seacraft Gallery is a leading supplier of handcrafted wooden model ships and boats. We have museum-quality Cutty Sark and Thermopylae model ships. Contact us today for your inquire! 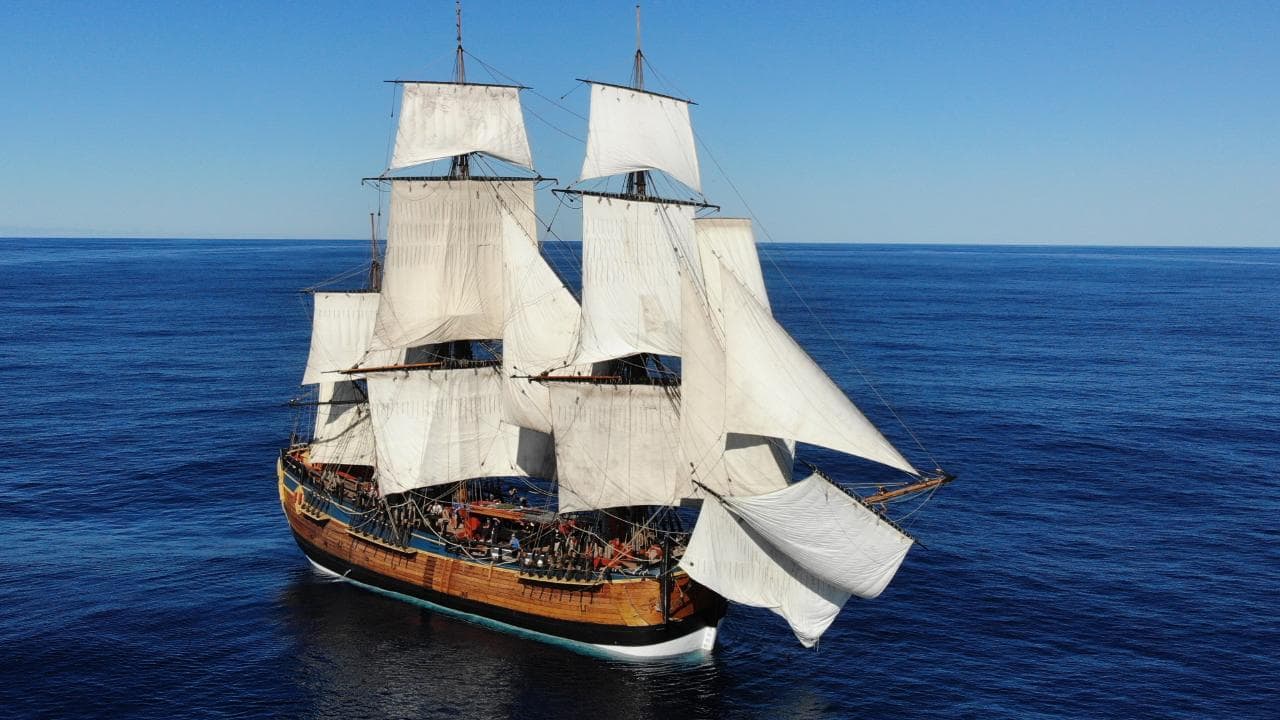