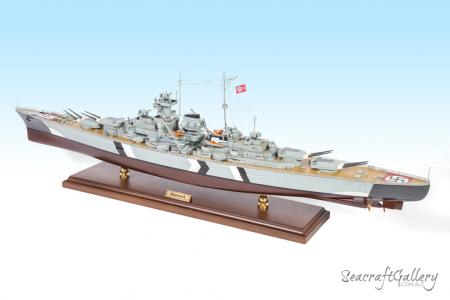 The sea has played a massive part in human history, helping us to connect to parts of the world we once never knew existed. However, while ships have long been a part of human history, some vessels hold more historical note than others. Few ships in history can match the historical importance of the Bismark. As one of the most important ships of the Second World War, the Bismark was a major part of the end of the battleship era, with its sinking in May 1941 leading to a changing of the guard in how naval combat would be taken on.

As part of our collection of WWII era battleships, our pristine remake of the Bismarck can give you everything you need in a model ship. Whether used as a standalone item in a boardroom collection or pieced in as part of a wider collection, our top-class recreation of the Bismarck has become the ideal gift for anyone interested in wartime vessels.

The Bismarck itself is quite a remarkable ship. It was a major part of the Bismarck-class of battleships produced by Nazi Germany. The aim was simple: to build a class of ships that could dominate the seas and turn the tide of coming war. Laid down in 1936, the ship was developed to be put into work by 1939 and launched in February 1939. It was a major part of the German fleet and, alongside sister ship Tirpitz was the largest battleship ever built by the German navy.

However, the ship did only last for eight months in terms of its naval career – it was launched in February 1940, yet was sunk by May 1941. In that brief time, though, the ship left a lasting impression on those who were keen to understand its unique history.

The Bismarck made a huge impression for various reasons, but part of its importance came down to the size. Intimidating in the extreme for anyone facing off against the ship, the Bismarck was spoken of in hushed tones by the majority of the Allied forces it would face against.

It took part in one major offensive operation, in May 1941, where it was eventually damaged and sunk. Alongside the Prinz Eugen, the aim was to smash trough the Allied shipping programs moving from Britain to America. The two ships, though, were detected and naval vessels by Britain were sent out to take on the Bismarck in a major battle.

The HMS Prince of Wales took on the Bismarck, while the HMS Hood took on the Prinz Eugen. The battle seen the Hood destroyed by dual fire from the two German ships, but the Bismarck took serious damage whilst routing the Prince of Wales. It was forced to bring an end to the raiding mission due to the severity of the damage received in the conflict.

As the Bismarck made its way back to occupied France for repairs, it was pursued and attacked by British forces sensing the damage. It was attacked by aircraft heading from the HMS Ark Royal; a major hit was landed on the steering gear and made it inoperable. The Bismarck was then taken on by a series of British cruisers and battleships, and took incredible amounts of damage – scuttling the ship.

The damage was so severe that the ship was abandoned, though most experts believe the severity of the damage meant it would have sunk regardless. The wreckage of the Bismarck sunk, and was not found again until 1989 when Robert Ballard found it. It has since been surveyed, and surprisingly it was found that the shelling the ship took did not actually sink the ship; nor did the torpedoes. Indeed, the plating of the armour deck was more or less intact. Had the Germans left behind one of their flagship vessels too early? Or was the Bismarck already in major trouble before it was abandoned?