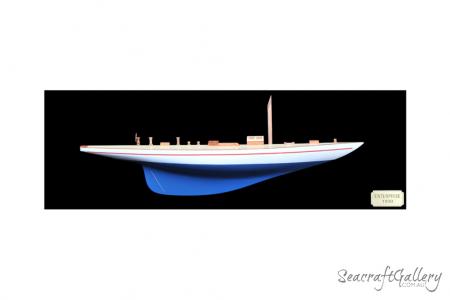 This Enterprise half-hull yacht hangs on the wall and takes up little space. This collectible nautical works of art will be an ideal gift for your friends or a timeless decorative piece in your home. The model was hand crafted from tropical hardwood and used the traditional plank on bulkhead method. After the bulkheads are laid and the hull lines trued, the hull is planked with individual wooden strips to form a smooth silhouette.

In the midst of America’s financial crisis, in the late 1920s, a yacht was being designed that would emerge as the first of a new breed. Incorporating a sleek new style, and crafted using an assortment of lightweight metals, the Enterprise yacht would soon enter into the 14th America’s Cup Race. As the oldest international trophy competition in the world, the races allowed yacht clubs across the globe to compete for the chance to claim the title and bring the trophy home to their country. However, the previous race winning New York Yacht Club had been in possession of the trophy for 60 years, and was a favorite to defeat the challenging Royal Ulster Yacht Club.
Though America, and indeed much of the world, was in the grips of a recession, for some the races are the ultimate point of pride; Sir Thomas Lipton was one such person. Spending over a million dollars on his ship, Sir Lipton and his club presented the Shamrock V. While a beautiful craft herself, she was heavy, made of wood, and lacked the grace, finesse, and contemporary design that would see the Enterprise emerge victorious. As the smallest of the J-Class Yachts, the Enterprise began with the partnership of ship designer W. Starling Burgess and the legendary Herreshoff Manufacturing Company.
As J Class yachts, designed per Nathanael Herreshoff’s Universal Rule, each of the yachts were required to make the same rating based on calculating a number of each ship’s measurements. With this rule, any ships with similar ratings could race without having to make adjustments for various sail sizes and boat lengths.
As the new designer at Herreshoff’s Manufacturing Company, in Rhode Island, W. Starling Burgess set about collecting 20 years worth of data on the previous races, analyzed the wind to predict conditions on race day, and incorporated many design elements that, for the time, were quite revolutionary. Previously a designer of the M Class yachts, as well as a plane designer during the war, Burgess felt he could create the racing yacht of the future for the New York Yacht Club.
Laying down the hull, Burgess utilized steel frames and bronze planking, opting for a balance of strength and light weight instead of heavier wood. At 120 feet long and 22 feet wide, the Enterprise emerged at just under 130 tons with vast improvements that would give her a racing edge. While the deck was made of pine, and the boom also of wood, the 165 foot single mast was crafted from lightweight hardened aluminum; the first of her kind. With a Bermuda rigged triangular sail, instead of the more standard four-cornered Gaff Rig, she more efficiently used the wind, and with 23 winches the crew would appreciate greater control. Also included, for the first time, were modern electrical navigational instruments that would allow the crew to sail on as accurate a course as possible.
Launched on April 14, 1930, the Enterprise would soon be gliding over the seas in the race of a lifetime. Owned by the Vanderbilt Syndicate, the Enterprise entered into her selection trials, attempting to earn her shot to represent her country. Skippered by Harold Vanderbilt, with a crew of 31, the Enterprise swiftly beat out the other three New York clubs, earning the right to defend theAmerica’s Cup. Racing against the British Shamrock V, the Enterprise was victorious in all four races, cleanly retaining the cup for New York with her wins. Though she was created by legendary designers, launched to great fanfare, and won in true style, the Enterprise was never to sail again. Following her victories in the races, the Enterprise was dry docked until 1935, after which she was sadly broken up for scrap.