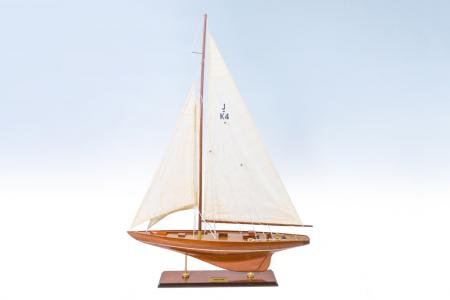 While the America’s Cup has long been dominated by the Americans themselves, Britain has run them close on more than a few occasions. The closest they have come to winning it, though, was with the beautiful Endeavour. Known for her speed and power on the waves, this boat was one of the most impressive British entries into one of the most prestigious events in nautical sport. This wonderful recreation, our Endeavour model yacht, is a must-have for all nautical fans and lovers of the sport. This is recreated to help give you as close to the real thing as you can, with this scale model sailing boat giving you a fine item to store, hang or display in any way you choose.

We also provide access to display cabinets, if you would like to store it front and centre. Attention to detail is essential, with our museum quality Endeavour model yacht making a fine way to complete a set. For lovers of the America’s Cup or for fans of Britain’s finest ever entry, you’ll love this Endeavour model yacht.

About the Endeavour yacht

She entered many tournaments prior to the America’s Cup, and won with ease. With impressive wins against other J-Class ships such as the Velsheda and the Shamrock V (which was a great inspiration for the Endeavour), she gained enough valour to get an entry into the America’s Cup. Sailing off to take on the infamous New York Yacht Club and their sturdy Rainbow, the campaign was the most exciting in years. However, she nearly never started: the crew of Sopwith went on strike prior to heading to the America. Therefore, Sopwith had to improvise and brought together a team of impressive and robust amateurs to help him try to win the Cup. As one might expect, though, that lack of experience brought unfortunate failure for the Endeavour. She lost 4-2 in the end to the Rainbow. However, she was a contentious win – despite the staff issue – and was remarked in a famous headline as “Britannia rules the waves, and America waives the rules.”

In 2000, she was sold to Dennis Kozlowsi for a fee of $15m. she was then sold on to Cassio Antunes in 2006 to the Hawaiian. Undergoing an 18-month refit in New Zealand in 2011, she was restored to incredible condition once again being modernised. At the time of writing, the ship is supposedly up for sale – with a price of just under $20m for anyone with a few dollars down the back of their couch! While she might not have achieved the greatness intended, the legacy and history of the Endeavour left an incredible mark on British and world sailing.