View cart “RMS Titanic 80cm with lights” has been added to your cart. 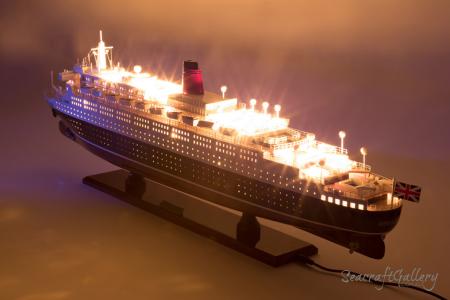 Keep the exciting times of your holidays alive with the model of Royal Queen Elizabeth II Cruise ship. This museum quality wooden model is entirely hand built and captures most of the details of the actual Queen Elizabeth II. If you are looking for a gift for loved ones, a decoration for home or an addition to your collection, this model will be a great option.

History of the Queen Elizabeth II

Queen Elizabeth 2, often referred to simply as the QE2, is an ocean liner built for Cunard and operated by Cunard as liner and cruise ship from 1969 to 2008. She was designed as a liner on the transatlantic service from her home port of Southampton, UK, to New York, USA, and was named after the earlier Cunard liner RMS Queen Elizabeth. She served as the flagship of the line from 1969 until succeeded by RMS Queen Mary 2 in 2004. Designed in Cunard’s then headquarters and regional offices in Liverpool and Southampton respectively, and built in Clydebank, Scotland, she was considered to be the last of the great transatlantic ocean liners until the construction of the Queen Mary 2 was announced. Before she was refitted with a diesel power plant in 1986/87, Queen Elizabeth 2 was also the last oil-fired passenger steamship to cross the Atlantic in scheduled liner service.

During almost forty years of service, the Queen Elizabeth 2 undertook regular world cruises and latterly operated predominantly as a cruise ship, sailing out of Southampton, England. Queen Elizabeth 2 had no running mate and never ran a year-round weekly transatlantic express service to New York. Queen Elizabeth 2 did, however, continue the Cunard tradition of regular scheduled transatlantic crossings every year of her service life. Contrary to the title of this article, Queen Elizabeth 2 was never designated RMS, or Royal Mail Ship. Queen Elizabeth 2 retired from active Cunard service on 27 November 2008. She was acquired by Istithmar, the investment company of Dubai World, which planned to begin conversion of the vessel to a floating hotel moored at the Palm Jumeirah, Dubai. In July 2012, Istithmar announced that conversion would take about 18 months.