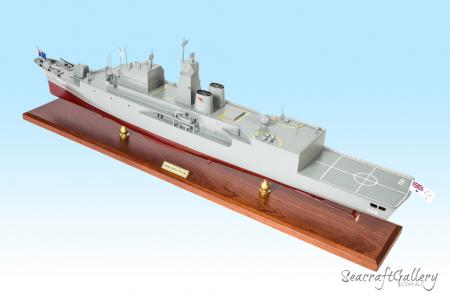 Built to match the real-life HMAS Anzac FFH150, our new model catches its beauty in the most pristine detail. Revered from its time as a part of the Royal Australian and Royal New Zealand Navy forces, this was a ship that served a vital range of services. Today, it’s still operational and plays a leading role in helping to preserve the coasts of Oceania. Now, you can have your own replica of this very unique ship brought into your venue. It’s the ideal choice for anyone looking for a brand new ship model, complete with resplendent detail and built to scale. We’ve worked around the clock to ensure that you can pick up this vital part of the Navy for both Australia and New Zealand. With a closely detailed model capturing all that makes the original such a spectacular piece of engineering, we’ll make sure you can pick up a fantastic model for any boardroom, household, or personal study.

The Anzac is a leading ship of the Anzac-class frigate range which is used by the Royal Australian Navy and Royal New Zealand Navy. They first came into service in 1996 and were part of the successful INTERFET peacekeeping task force that came to be in 1999. It was part of the Battle of Al Faw, which made history as the first RAN ship to fire a shot in anger since the Vietnam War. As of 2020, this ship is still being used today. It first was laid down in 1993 and was commissioned for use in May 1996. In that time, it has served in various parts of the world in terms of warfare, including in East Timor, the Persian Gulf, and specifically in Iraq. It’s also won several awards over the years, including the Meritorious Unit Citation. Its first official mission, though, came in 1997.

The ship was used to take part in the Operation Dirk event; an event that seen it tackle illegal fishing in the Southern Ocean. They found various illegal fishing events and put a stop to them. It was used for military warfare in East Timor and then in the Persian Gulf on three occasions, being taken to the Gulf three times. It was used as part of Operational Falconer in 2003 and provided naval gunfire support during the Battle of Al Faw. This helps to take the Al Faw Peninsula before major oil terminals could be attacked and sabotaged. This made her the first Australian war vessel to fire a shot in anger in over three decades. Outside of warfare, this ship class has been used in various ceremonial events – including the Northern Trident ceremonial deployments in 2005. It has undergone several upgrades over the years, too, most notably in 2014 when it was fitted as part of the Anti-Ship Missile Defence Upgrade program. Today, it enjoys safe freedom of entry into various cities, including Albany, where it first departed from in the 1990s.